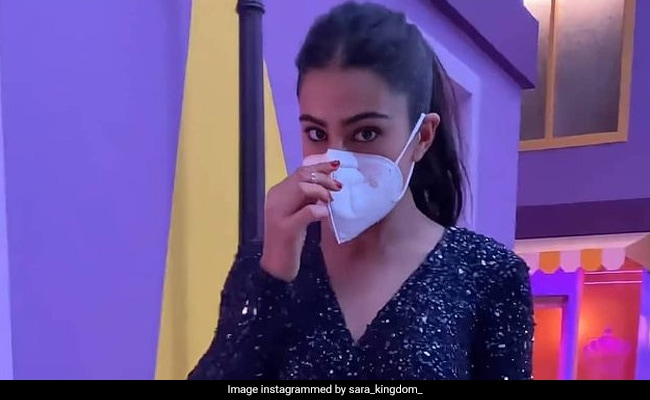 Sara Ali Khan’s message came loud and clear on Tuesday. The 25-year-old actress urged all her fans to wear masks at all times. Sara,  on her Instagram stories, shared a musical reminder to wear masks. In the brief video, the actress can be seen dressed to perfection in a blue sequined outfit. She wears her masks in the video as the track Cover your nose, mouth and don’t leave the house without a mask. plays in the backdrop. The video was later curated by several fan pages dedicated to the actress on social media.

ICYMI, check out the video here:

Sara Ali Khan  trended bug time on social media on Tuesday after she posted a video with fellow actress Janhvi Kapoor. The duo can be seen working out together in the viral video. “Go with the flow, steady and slow, kick high- squat low. That’s how you’ll get the golden glow. For better instructions ask Namrata Purohit (Sara’s fitness trainer) to show,” Sara Ali Khan captioned the post.

Sara Ali Khan stepped into Bollywood in the year 2018 with the film Kedarnath, opposite late actor Sushant Singh Rajput. She has starred in films such as Simmba, co-starring Ranveer Singh and Love Aaj Kal with Kartik Aaryan. Sara’s upcoming project is Atrangi Re, co-starring Akshay Kumar and Dhanush. She was last seen in Coolie No 1 remake, co-starring Varun Dhawan.